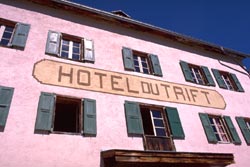 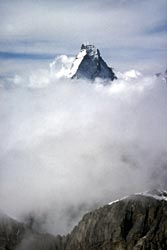 To the west of Zermatt there is a deep section of the valley which, at the level of Berggasthaus Trift, opens up into a large basin. Berggasthaus Trift is located above the line beyond which forests no longer grow - a height of 2337 metres. It is surrounded by ledges of rock, boulders, greenery and waterfalls. It is the only valley in Zermatt that is not equipped with mountain railways and ski-runs. Consequently, the hiking trail largely consists of untouched countryside. Berggasthaus Trift offers a wonderful view of the mountain range from Obergabelhorn to Zinalrothorn. In the evening one can witness the wonderful sunset at Monte Rosa.

Berggasthaus Trift's location is ideal for wonderful hiking trips, e.g. to Schweifinen where one can enjoy the sunset on the Matterhorn, or on the Mettelhorn with an unforgettable view of the range of four thousand metre mountains down into the Matter valley. One can also embark on a wonderful outing to Rothornhütte, or take the unforgettable mountain hike via Höhbalmen, one of the most beautiful outings in the entire Alpine region.

The year 2000 sees the 100 year anniversary celebrations of Berggasthaus Trift. Accordingly, Hugo and Fabienne Biner have carried out various renovation work. In this respect great care was taken to maintain the original character. The building is still thought of as Hotel du Trift, although it is classified as a mountain inn. The influence of the French language emanates from the period in which Napoleon advanced towards Wallis in the 19th century. The building has been painted in the original pink colour as it was at the turn of the last century. At the front of the house large solid larch tables and benches line the walls in the warming sun together with old metal plate tables and folding chairs dating back to the building's origins. The hall has also been renovated so as to create the building's original, cozy character with the old wooden floor, new period-style panel walls and a wood-burning stove.

As the Trift valley is not a developed area, drinks, food, fuel and other goods are transported via helicopter. Berggasthaus Trift is not linked up to the public power supply system. Consequently, the hall is heated via a wood stove, the food is cooked on a gas oven, and the energy for the lighting is produced via a power aggregate or solar power.

The area in which Trift is located is ideal for watching wildlife. Chamois, marmots and rock goats can be seen regularly in the direct vicinity.