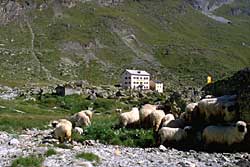 In 1887 Peter Aufdenblatten built the first Hotel du Trift on a site approximately 70 meters higher than that of the present Berggasthaus Trift. As in the case of the present Hotel du Trift, it provided overnight accommodation and served as a resting place on the route up to the four thousand metre high mountains Ober Gabelhorn and Zinal Rothorn.

A huge avalanche ploughed through Platthorn, Trift and Zermatt in 1898. It completely destroyed the Hotel du Trift. The story has it that during that spring, undamaged bottles of perfectly good wine were found on the pastures of Zermatt.

The year 1900 saw the opening by Peter Aufdenblatten of the second Hotel du Trift, which was built in exactly the same style as the first. A chapel was erected behind the hotel. It is still open to the public to this very day. Berggasthaus Trift remained in business during the difficult times spanning the two world wars, and also during the depression. Problems arose during 1949 as the district of Oberaargau of the SAC built a new mountain hut at 3198 metres, below Eseltschuggen, which reduced tours to the mountains to less than 1 1/2 hours. Consequently, the means of subsistence for the Aufdenblatten family was no longer guaranteed, and Hotel du Trift was left to survive on its own. 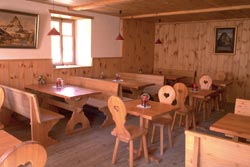 At the end of the 1970s Stefan Julen, Peter Aufdenblatten's great-grandson, came to Trift with some friends, renovated it and continued the mountain hut operations during the summer months.

Since 1995 Berggasthaus Trift is lead by Hugo and Fabienne Biner. Fabienne is the builder's great granddaughter. The Biners carried on from the initial renovation work with a great deal of their own work and tactfully adapted the building so as to meet present day requirements. The business is becoming ever more popular with passing mountaineers and guests from Switzerland and abroad.

Berggasthaus Trift is surrounded by remnants of walls which formerly served as sheep pens. Trift has always been an area for sheep farming. Every two weeks the shepherds would gather their animals from the areas Schweifinen, Triftkumme and Hohliecht. Each shepherd had his own pen and was thus able to check whether his herd was complete. On such occasions the shepherds would feed their sheep with "Gläkk", a mixture of salt and flour, and select the young. Such meetings also had a social function, for discussions and the exchange of news.